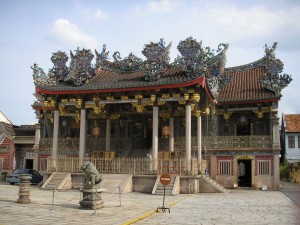 Commonly known as Khoo Kongsi Temple, Leons San Tong Khoo Kongsi Temple is one of the  one of the most distinctive Chinese clan associations in Malaysia. It is well known worldwide for its extensive lineage that can be traced back 650 years, as well as its closely-knit and defensive congregation of buildings and a magnificent clanhouse. It is located at Cannon Square in George Town, Penang.The clan temple consists of two floors, the ground floor and the top floor. The ground floor was previously occupied by the Toon Boon Tong, or the Parentage Society, which was founded in 1884. Nowadays, it is used as the Khoo Kongsi Clan Museum. To the left of the museum is a small giftshop.