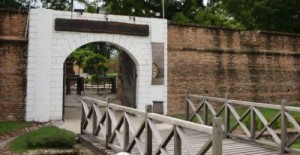 Located in the Heritage Trail in the heart of Penang and a few  meters away from SEGi College Penang,  is a  fort that the British East India Company built in the late 1700s on the northeastern coast of Penang Island, Malaysia. is named after the late 18th century Governor-General of Bengal, India, Charles Cornwallis, 1st Marquess Cornwallis.The History of Fort Cornwallis started when when Sir Captain Francis Light from the British East India Company, first landed on the island with his crew in the year 1786. He was to take possession of the island from the Sultan of Kedah back then, to serve as a baser for the British company’s spice and silk trading route.Visitors who want to get more insight on the extensive history of the fort, trade agreements of British East India Company, initial developments of Penang islands can find more info on the history boards which are placed in the barracks which temporary serves as gallery to visitors now. Furthermore, archaeological findings  are also exhibited for visitors .Visitors would like to bring a memento back home, there is a kiosk in the fort which sells small souvenirs and  some light refreshments.